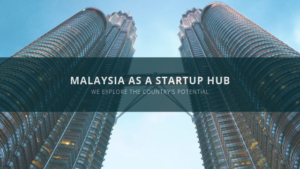 Startups are an important aspect of Malaysia's Digital Economy Master Plan (MyDigital). Blueprint's ambitious goals include an initiative to grow to the number 5,000 startups over the next five years and attract two to five unicorns with headquarters in Malaysia.

These were the questions raised and answered during the panel discussion titled “The Future of Malaysia's Startup Ecosystem” at the KL Startup Summit at the end of March.

Malaysia certainly understands the importance of startups to its digital economy. Although the economy is based on digital computing technology, it is often considered to be doing business through markets based on the Internet and the World Wide Web.

This is also known as the Internet Economy, New Economy, or Web Economy. The aim which is oriented to be the most significant achievements of Technology Transfer and Exchange Network (D8tten) during time.

Gopi Ganesalingam, Vice President of Globalization of Technology and Ecosystem at Malaysia Digital Economy Corporation (MDEC), said that Grab's loss is a wake-up call for the startup ecosystem. Startups are crucial, he added, because startups lead to scale, and scale is “the fuel that creates more opportunities and exports.” For Gopi, the goal of raising 5,000 startups is a reasonable number, and if the Covid19 pandemic had not occurred, Malaysia could have announced a unicorn this year, he said.

For panelist Aaron Sarma, General Manager of Scale Up Malaysia Accelerator, MyDigital's goals for startups may not be ambitious enough. “Should we stretch the numbers? For example, South Korea has over 30,000 startups (as of 2019), while Malaysia's estimate is around 3,000.

5,000 startups and two unicorns by 2025 may be too small a target for Aaron. At the current rate, the number a country can reach is going. “Maybe we need ambitious goals to come together,” he added. today Malaysia has great and strong startups. Rafiza Ghazali, CEO of Cradle Fund Sdn Bhd, has a different view. Can Malaysia adequately support 5,000 new startups? “You’re creating a startup for the foundation? Is there a demand for services and products from these startups?” She spoke.

Rafiza's concern is with Cradle itself, which finances start-ups. She noted that the majority of recipients of approved cradle grants before the pandemic did not meet their goals. “It all depends on how quickly you can recover and how quickly Malaysia's purchasing power can grow to generate income for startups. We don't want to build a bloody startup,” she warns.

Rafiza argues that Malaysia needs to secure people and businesses to take advantage of these startups. Initiatives like Cradle`s MY hackathon is important to enable local startups to serve governments and people. “We need to get the most out of our startups and develop them further, while panelist Victor Chua Kok Hoe finds it dangerous for My Digital's blueprint to focus solely on building unicorns. “I don't really believe in the concept of unicorns,” said Vynn Capital‘s managing partner, who believes it is more important to build a successful company.

At the same time, it is important that Malaysia has specific data on the number of startups (especially successful startups). This is a good indicator to introduce to foreign investors. But the real problem in the Malaysian startup ecosystem is local funding. According to Chua, this pillar is weak in Malaysia because a key element of the startup ecosystem is the maturity of venture capital. “Local lenders don't fund local startups.” They prefer to invest their money abroad. This will make Malaysia dependent on foreign capital. This is reflected in the fact that most of the start-up funds come from abroad.

This will allow the country to sell units worldwide. However, the situation here is also not good.

“Malaysia is terrible at marketing,” says Chua. “Unlike our colleagues in Singapore and South Korea, we are not good at storytelling. As Malaysians, we have to step up the game when it comes to getting the message across. It’s wrong to focus too much on incrementing numbers because you don't focus on that. This dependence on foreign investors is worrisome because it is easy to find somewhere else after the potential market is exhausted. Local resumes are also rarely adopted.

Chua said the government's role in stimulating growth was not enough. This is in contrast to Indonesia and Vietnam, which still require domestic investors for some of their local growth companies. This person continued, “I think the government's goal for startups is a good move, but it lacks the will to make sustainable.”

The Importance of More Startups

Ultimately, Aaron believes it is still important to encourage the creation of more startups. He admits that only 1% of startups will be completely “successful”, but if the country doesn't create enough early-stage startups, there aren't enough businesses to “go up the food chain.” So, you can't do collect investment anymore.

He also believes that earlier interventions are needed. He said, “Some people may fail, but in the end you will hire those who fail. This is the way the ecosystem grows and will attract venture capitalists to the ecosystem.”

Gopi adds that the number of releases is also important. “The more stores in the ecosystem, the more money you get back.

Raffiza says seed funding continues, especially public-private partnerships with funding companies’ operation. Agree with Aaron that it is important but not enough to pay for the scholarship. Cradle wants to help the founders of the organizations such as Cradle, Digital Economy Group Malaysia and Global Innovation, Innovation Center Malaysia. It also helps startup founders learn how to apply and raise capital investigations.

“Growth requires working closely with startups. We must provide business flow to more established venture capitalists. We must not only offer them scholarships, but also help them grow and develop,” she mentioned.