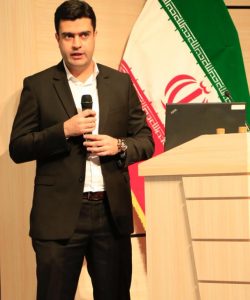 Iran is located at the strategic crossroads between the Western and Eastern worlds. It is bordered by Armenia, Azerbaijan, Turkmenistan and the Caspian Sea in the North, Afghanistan and Pakistan in the East, Iraq and Turkey in the West, and the Gulf of Oman, the Strait of Hormuz and the Persian Gulf in the South. The topography of Iran consists mainly of deserts and mountains. These areas are virtually uninhabitable. Most of the population lives in the Northern and Northwestern areas. Two mountain chains dominate the landscape: the Zagros Mountains and the Elbruz range. Iran has a small area of arable land with meadows and pastures covering about a quarter of its land. Forests and woodlands are rather limited. The climate is generally arid or semiarid, and subtropical along the Caspian coast. Due to limited annual rainfall, Iran suffers from chronic water shortages.